5 Things ‘They’ Never Told Me about Grief

I’m no stranger to death. My mom hung herself before my first birthday. I don’t remember her, though. Other than missing having a ‘real’ mom and wondering how my life would have been different with her in it, I don’t really think about it much. At least not any more. And so I wouldn’t really say I’ve grieved that loss. Not really. 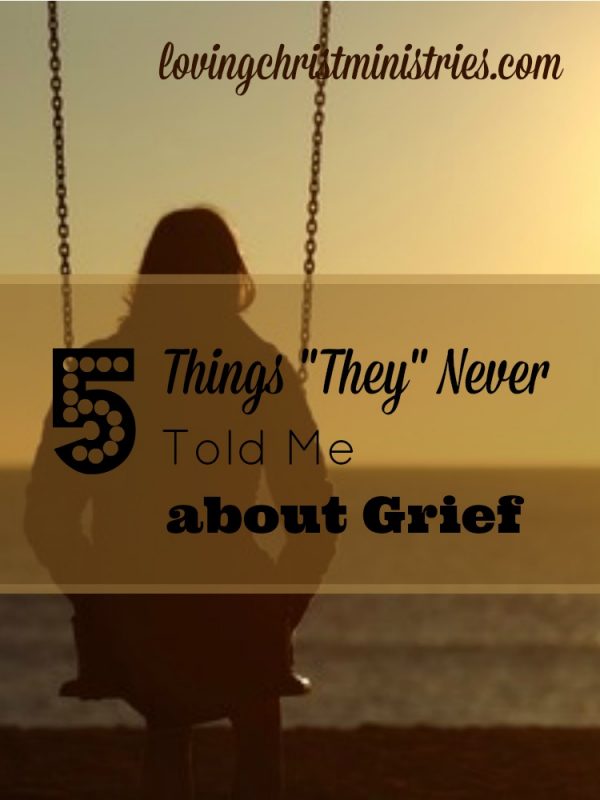 My maternal grandma died the winter before I turned 11. As a child, death was just weird to me. I saw Grandma in her casket and it looked to me like she was just sleeping. It didn’t make sense to me that she wouldn’t wake up although I knew that’s what being dead meant. I cried for my grandma…and for myself. I would miss playing Crazy Eights with her and eating her fabulous fried chicken and the way she always stuck up for me when my big brother picked on me. And it’s true, I did miss those things. But do you know what? After a few days passed, my life became busy again with normal 11-year-old stuff. Oh, I still missed Grandma on occasion, but it wasn’t a crying-filled, gut-wrenching kind of missing her, and so I was fine.

What have you learned about grief?

Ten years later, another grandma died. This time, I cried not just for the things I would miss doing with her but also for the events in my life she would miss. She’d never see me graduate from college or get married. She wouldn’t know my kids and even worse, they would never know her. I spoke with my stepmother about these things and she assured me that the differences in how I felt between grandmothers had to do with my own growth and maturity level. I guess it makes sense that at different ages there would be different reactions, especially when it came to losing a grandparent. My sorrow lasted a little longer than before but eventually I became busy with my own things, and my life again moved on. I never quit thinking fondly of her and missing her, but those things never got in the way of my living.

And then, David died. If you are wondering who David is to me, I guess I’d pretty much call him the best friend I’ve ever had. He was my supporter, my encourager, my motivator. He was my ‘goodness’. When he died, I died too. Oh, not physically…obviously. But I learned quickly that there’s a difference between existing and living. I hadn’t really known that before.

When trying to survive David’s death, I thought back over losing my other loved ones and how I grieved for them. With David’s death, I couldn’t seem to function, and I was certain there must be something wrong with me. I experienced feelings and thoughts I never knew possible. Nothing had ever prepared me. No one had ever told me. Why didn’t they tell me?

Who are they? I don’t know. Anyone.

While I know there are many more, here are the top five things about grief I had to learn on my own:

I felt sharp physical pain like someone gripped my internal organs into a vise and squeezed and twisted and turned them. It hurt. Physically. Like something was being ripped from me.

I had no idea it could feel like that.

2. There is no timeline for grief.

I grew up with the philosophy of ‘get over it’ and ‘move on’ whenever facing any difficulty. But this time, I couldn’t seem to get over it. Because of that, I wanted to know just exactly how long it would be until I quit hurting. I asked an online friend who had been through her own grief journey. “Julie,” she told me. “I wish I could give you an exact time, but I can’t. I guess, for me, it took about two years for the worst of the grief to subside.” Two years! That seemed like forever, but at least I had a timeframe. Well, when two years came and went and I still thought about David every day and still struggled to understand the point in living if we were just going to die, I knew that no one else’s time frame would work for me. Let me say for those of you in the early stage, the worst of the physical pain did subside within that two years so fortunately that doesn’t seem to last as long, at least it didn’t for me.

I learned there is no time frame, and that’s okay. No one can tell another when to be finished grieving. It is a personal journey. I heard frequently that time heals all wounds. I disagree. It’s not the time that heals the wounds but rather what a person does with that time. And while we’re working on grieving, we can have as much time as we need.

3. Speaking of time, the third thing ‘they’ never told me about grief is that the way I measure time would change.

Time became measured in relation to the date David died. From that very moment on, every news event that I hear about, every song that I think about, I measure when it happened as ‘David was alive when that happened’ or ‘that happened after David died.’ And I have the always present thought of ‘I wonder what David would think of that.’ Even now, almost 11 years later…’David was still alive when that happened.’ For example, in church, lyrics are posted on a screen at the front. At the bottom of each slide is the copyright date. I still find myself looking at that date and thinking about whether it was before or after he died.

4. Grief makes you question your faith.

I thought I had faith; I was raised with faith or at least with God. But the thing is, as far as whether God was real or not, well, I guess I didn’t truly have faith. I believed in God, sure. I thought I did, anyway. I knew He could help me live a more caring and loving life, and I liked the idea of eternal life. I always figured, though, that if I was wrong and when we died we were just dead, it wouldn’t matter because we wouldn’t know. Gruesome way to look at it, I know, but it worked for me. Until David died. Then, I lost all my faith. I was so afraid there was no God and with no God, no point in living. If David could die, what was the point at all? There was none. It took a long time before I had a real glimmer of hope internally that he was okay and that I would be okay.

An online friend (I ‘met’ lots of online friends during the early years because it felt safe to keep grieving with them. In my ‘real’ life I felt like I had to pretend to be okay) told me my faith must not have been very strong if I lost it so easily. That upset me at first, but then I realized that he might be right. Or maybe not. I think no matter what faith you have before the loss of a loved one, it’s going to be shaken. And that’s okay. It’s all okay.

5. Grief does not come packaged in a tidy little five stage plan.

Oh, I know there’s validity learning about denial, anger, bargaining, depression, and acceptance; we need to know what they are to understand that it’s ‘normal’ to feel these emotions when grieving, but I discovered that, unlike my previous understanding of them, they are not experienced in order nor do they each last the same amount of time, AND once you’ve experienced one that does NOT mean it won’t make an appearance again years down the road. Hardly fair, huh? But it’s true. Once you get past the anger or denial, don’t be surprised when either pops back up again. It can present itself in the same way as it did before (anger at God, anger at yourself, anger at the deceased) or as in my case, it can present itself differently (anger and impatience with my spouse, my children, my co-workers).

Maybe if ‘they’ had told me these things, grieving would have made more sense to me. I suppose it’s possible ‘they’ did tell me, and I just didn’t listen because it didn’t pertain to me. Hindsight, right?

There is no ‘normal’ way to grieve and there’s no ‘getting over it’. There are as many ways to grieve as there are people in the world. Everybody’s experience is different, and each one is valid.

No book or blog you read will make your grief go away. It doesn’t even go away with time or with a support group or prayer. It really never goes away. Instead of getting over it, you get through it. You’ll learn that it’s forever a part of you, and you’ll find strength as you learn and grow. You will still grieve; however, your grief will change. You can find purpose again. And joy. Those things are still out there even when you are at the bottom of the grief pit. When you’re ready, they’ll still be there. They’ll sneak into your life little bits at a time until eventually you’ll be able to function again. You’ll have your new normal. You will survive.

5 Ways to Help Someone Grieving

How I Became Thankful in Grief

Learning to Manage Anger in Grief

What’s something you learned about grief that you hadn’t known before? 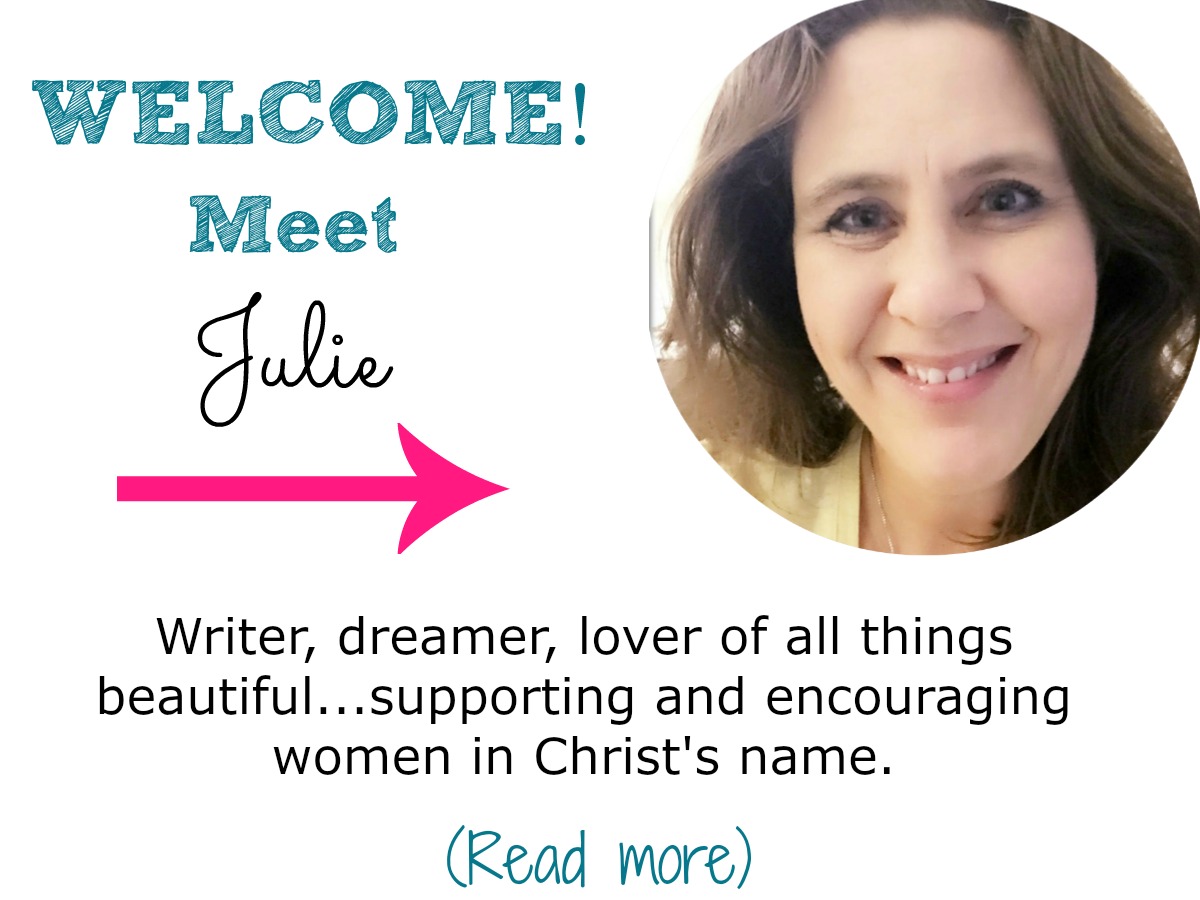 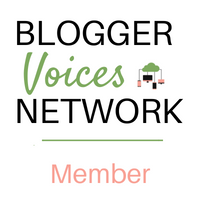 Subscribe to the newsletter here and receive our 10 initial steps to planning a retreat checklist.